Compared to every other plasticky streaming device on the market, the Apple TV is quite simply a cut above – and an Apple TV VPN is the perfect companion which can get you global content from around the world at the touch of a button.

From Netflix, Disney+ and Amazon Prime to region-specific services like BBC iPlayer, ESPN, Kayo and more, just about every service restricts what users can watch dependent on location. The best VPN can virtually relocate you anywhere in the world and get you absolutely everything that you pay for.

There’s a catch, though. Apple TV devices don’t natively support VPN connections, so to set up your Apple TV VPN there are a few steps to work through first. To make everything as simple as possible, we’ve outlined everything you need to know right here – and we’ve also picked the top 5 VPNs for Apple TV on the market today.

How to use an Apple TV VPN

If you want full VPN protection, you’ll need to install a router VPN or set up a virtual router. That means your internet connection will be encrypted and relocated before it gets to your Apple TV. While setup can be complex, we recommend following our in-depth guide on how to setup a virtual router, which in our opinion is much easier than installing a VPN directly on your router.

If you just want to unblock streaming content, though, using Smart DNS is a simpler option. While Smart DNS doesn’t offer the privacy benefits of a true VPN, it’s unlikely you’ll be doing much more than watching TV on your Apple TV, so quick and easy setup alongside superb streaming functionality are likely to be your top priorities.

Our top choice for an Apple TV VPN is ExpressVPN, and we’ll briefly outline how to set up an Apple TV VPN at the end of this guide – click here to jump down. Before that, though, we’ll run down the very best Apple TV VPN services available right now – all of which either support Smart DNS and routers, or at least one option.

The best Apple TV VPN you can get

Supports tons of other devices

No matter how you want to access extra content on your Apple TV, ExpressVPN delivers. Its Smart DNS feature (known as MediaStreamer) is quick and easy to get going, and it’s one of the few VPNs on the market that has a dedicated router app.

That might not sound like much, but if you want all of the good stuff an Apple TV VPN can offer, not just the freedom to stream extra content, you’ll need to install it on your router.

For most, though, MediaStreamer will be plenty – and even setting up Smart DNS on your Apple TV sounds complicated enough. Thankfully, while it’s not as hard as it sounds, ExpressVPN also boasts some of the best customer support in the business. That means you’ll have comprehensive written guides to follow, and if anything doesn’t go as planned, the live chat support is second to none.

However, just because your main use for your VPN might be on your Apple TV, that doesn’t mean you can’t protect your other devices. With a reasonable five connections permitted simultaneously, you can protect your iPhone, PC, and even more devices as well. It’s not as generous as some, but it should be enough.

Some streaming sites, Netflix especially, have upped their VPN blocking game in the last year or so, but Express can still reliably unblock tons of different libraries. However, if any issues do arise, Express’s live chat support is second to none, and it also offers a 30-day money-back guarantee so if it doesn’t perform as expected, you won’t be out of pocket.

Good speeds all round

As possibly the best-known VPN on the scene, NordVPN is likely to be most people’s first choice as a VPN for Apple TV. Thankfully, in our NordVPN review it delivered, too.

If you want to set it up directly on your device, NordVPN provides a simple and effective Smart DNS guide for Apple TV, which will allow you to expand your viewing. Again, although it sounds complex, it’s not, so don’t be afraid of giving it a go.

However, what’s missing is a dedicated router app like ExpressVPN’s, and this is what’s holding Nord back. While it’s absolutely possible to set the VPN up on your router, without any dedicated software it’s a much more involved process – so much so that many users choose to purchase a pre-installed router.

If you reckon you’re up to the task, though, once it’s installed you’ll have extra protection on all your devices. But if you’re just after an Apple TV VPN, we’d recommend sticking with the Smart DNS.

NordVPN also offers a 30-day money-back guarantee so you can test it out before committing, and if you want the superb VPN cover for a good price, it’s a great option.

Incredible value, and great for streaming

Apps are more basic than competitors’

Fancy a bargain? Sign up with Surfshark. With superb streaming performance, Smart DNS support, and unlimited simultaneous connections for less than $2.50 a month, for the penny pinchers it’s a no brainer.

However, what we really loved in our Surfshark review is the fact it delivers a service virtually on a par with ExpressVPN and NordVPN for less money. While it’s priced like a throwaway app, it’s premium through and through.

If you just want to unblock streaming sites on your Apple TV, you guessed it – just find the on-site guide to setting up Smart DNS and follow the steps. If you want an Apple TV VPN on your router, you can do that too, but as with Nord, there’s no dedicated app and the setup is manual.

Where you will notice a slight difference is when you come to make use of that unlimited connections policy. While the apps are attractive and stable, you won’t have quite the depth of configuration as the very best, but few people will be delving into those settings anyway.

So, if you want a cheap VPN for Apple TV that’ll get the job done, Surfshark is an excellent choice.

Interface can be troublesome

If you’re looking for a streaming VPN that’s comprehensive on both your desktop computer, mobile devices, and your Apple TV, in our CyberGhost VPN review we found the provider to be a good option.

With tons of servers worldwide and a functional Smart DNS service that’s not too hard to get up and running, it’s does pretty much all you need it to. However, again, there’s no dedicated router app to aid installation.

Smart DNS function is pretty much the same across the board, but CyberGhost’s true VPN apps have a very interesting feature not often seen. You can sort your servers by which streaming service they can unblock, which takes a lot of guesswork out of finding a good one.

The apps are, however, a little less polished than the previous services, so if you like things to be absolutely perfect, CyberGhost might not be the best choice.

That said, as a VPN for Apple TV it’s a good choice, and seeing as it’s super affordable too, we’re happy to recommend it.

Speeds are slightly down

As an Apple TV VPN, the most important thing is a VPN’s power to unblock streaming services, and PIA is very reliable here. Whether it’s US Netflix, Amazon Prime Video, BBC iPlayer or just about any other service, you’ll be able to watch wherever you are.

With a dedicated Smart DNS service, it’s super simple to get PIA up and running on your Apple TV device. All you need to do is search the comprehensive support section and go from there. Or, of course, like all the other options we’ve listed you could install PIA on your router, or set up a virtual router.

While a few other providers are a little faster, with average speeds of 320Mbps PIA still isn’t exactly slow, and for the price, it’s well worth testing out.

How do you use an Apple TV VPN?

Setting up an Apple TV VPN isn’t quite as simple as it is on other devices, and you’ll either have to use Smart DNS or install your chosen VPN on your router.

You chosen provider should have detailed instructions, but to set up Smart DNS, the process is fairly simple.

All you need to do is get the DNS address from your chosen provider – we recommend ExpressVPN (opens in new tab). This will be easily available by searching ‘Smart DNS’ on your provider’s help section.

Open up Network from Settings on your Apple TV. Head to Wi-Fi, and then click on Configure. Then change your DNS address from Automatic to Manual, and input the address given to you by your VPN.

Then, all you need to do is restart your Apple TV, and get watching!

Click here to return to our best Apple TV picks

What is Smart DNS?

Smart DNS is a way of spoofing your location when you either don’t want to, or simply can’t use a VPN connection. The most common reason to do so in this context is to unblock streaming services on Apple TVs.

Rather than how a VPN directs all of your traffic through a different server, Smart DNS only diverts your DNS (Domain Name Server) information. While this does not protect your privacy because your traffic is not encrypted, it’s enough to fool streaming services.

Another bonus is the fact that it slows your connection far less than a VPN. While we’d say most of our picks here are fast VPN services, Smart DNS is even quicker. 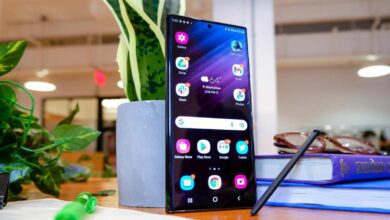